Marco Polo: The Journey that Changed the World | Illustrated Edition 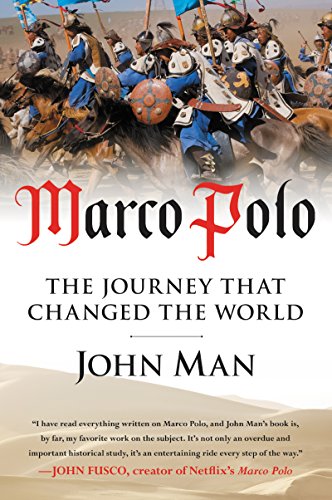 Details about Marco Polo: The Journey that Changed the World:

"I have read everything written on Marco Polo, and John Man's book is, by far, my favorite work on the subject. It's not only an over-due and important historical study, it's an entertaining ride every step of the way." — John Fusco, Creator of the Netflix original series Marco Polo The true history behind the Netflix original series Marco Polo, here is the remarkable story of the world's most famous traveler, retracing his legendary journey from Venice to China, the moment East first met West. In 1271, a young Italian merchant named Marco Polo embarked on a groundbreaking expedition from Venice, through the Middle East and Central Asia to China. His extraordinary reports of his experiences introduced medieval Europe to an exotic new world of emperors and concubines, amazing cities, huge armies, unusual spices and cuisine, and imperial riches. Marco Polo also revealed the wonders of Xanadu, the summer capital of Mongol emperor Kublai Khan. Almost 750 years later, acclaimed author John Man traveled in Marco Polo's footsteps to Xanadu then on to Beijing and through modern China in search of the history behind the legend. In this enthralling chronicle, Man draws on his own journey, new archaeological findings, and deep archival study to paint a vivid picture of Marco Polo and the great court of Kublai Khan.