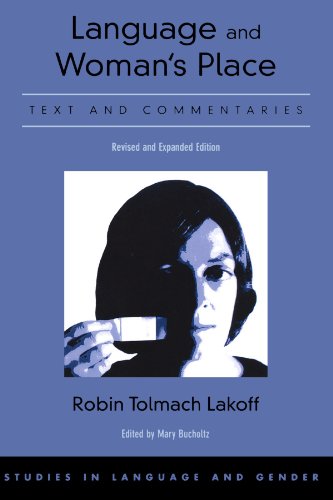 The 1975 publication of Robin Tolmach Lakoff's Language and Woman's Place, is widely recognized as having inaugurated feminist research on the relationship between language and gender, touching off a remarkable response among language scholars, feminists, and general readers. For the past thirty years, scholars of language and gender have been debating and developing Lakoff's initial observations.

Arguing that language is fundamental to gender inequality, Lakoff pointed to two areas in which inequalities can be found: Language used about women, such as the asymmetries between seemingly parallel terms like master and mistress, and language used by women, which places women in a double bind between being appropriately feminine and being fully human. Lakoff's central argument that "women's language" expresses powerlessness triggered a controversy that continues to this day.

The revised and expanded edition presents the full text of the original first edition, along with an introduction and annotations by Lakoff in which she reflects on the text a quarter century later and expands on some of the most widely discussed issues it raises. The volume also brings together commentaries from twenty-six leading scholars of language, gender, and sexuality, within linguistics, anthropology, modern languages, education, information sciences, and other disciplines. The commentaries discuss the book's contribution to feminist research on language and explore its ongoing relevance for scholarship in the field.

This new edition of Language and Woman's Place not only makes available once again the pioneering text of feminist linguistics; just as important, it places the text in the context of contemporary feminist and gender theory for a new generation of readers.