The Freedom of Speech: Talk and Slavery in the Anglo-Caribbean World | First Edition 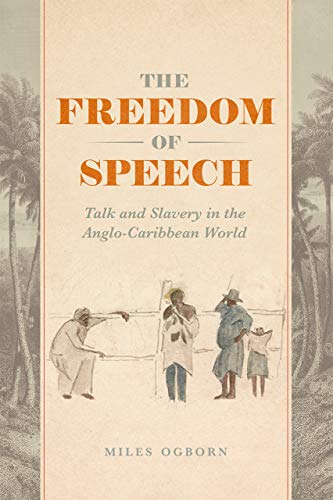 Details about The Freedom of Speech: Talk and Slavery in the Anglo-Caribbean World:

The institution of slavery has always depended on enforcing the boundaries between slaveholders and the enslaved. As historical geographer Miles Ogborn reveals in The Freedom of Speech, across the Anglo-Caribbean world the fundamental distinction between freedom and bondage relied upon the violent policing of the spoken word. Offering a compelling new lens on transatlantic slavery, this book gathers rich historical data from Barbados, Jamaica, and Britain to delve into the complex relationships between voice, slavery, and empire. From the most quotidian encounters to formal rules of what counted as evidence in court, the battleground of slavery lay in who could speak and under what conditions. But, as Ogborn shows through keen attention to both the traces of talk and the silences in the archives, if enslavement as a legal status could be made by words, it could be unmade by them as well. A deft interrogation of the duality of domination, The Freedom of Speech offers a rich interpretation of oral cultures that both supported and constantly threatened to undermine the slave system.