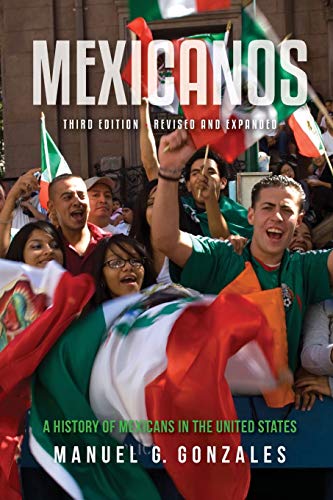 Sell Mexicanos, Third Edition: A History of Mexicans in the United States for $3.83

Details about Mexicanos, Third Edition: A History of Mexicans in the United States:

Newly revised and updated, Mexicanos tells the rich and vibrant story of Mexicans in the United States. Emerging from the ruins of Aztec civilization and from centuries of Spanish contact with indigenous people, Mexican culture followed the Spanish colonial frontier northward and put its distinctive mark on what became the southwestern United States. Shaped by their Indian and Spanish ancestors, deeply influenced by Catholicism, and tempered by an often difficult existence, Mexicans continue to play an important role in U.S. society, even as the dominant Anglo culture strives to assimilate them. Thorough and balanced, Mexicanos makes a valuable contribution to the understanding of the Mexican population of the United States—a growing minority who are a vital presence in 21st-century America.