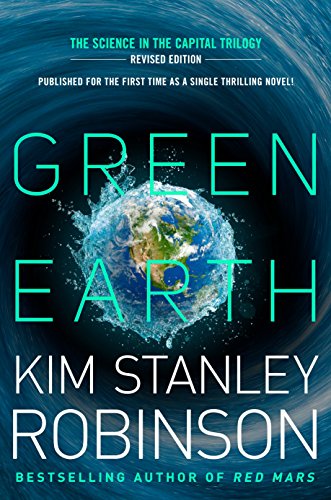 Details about Green Earth Science in the Capital Trilogy:

The landmark trilogy of cutting-edge science, international politics, and the real-life ramifications of climate change—updated and abridged into a single novel   More than a decade ago, bestselling author Kim Stanley Robinson began a groundbreaking series of near-future eco-thrillers—Forty Signs of Rain, Fifty Degrees Below, and Sixty Days and Counting—that grew increasingly urgent and vital as global warming continued unchecked. Now, condensed into one volume and updated with the latest research, this sweeping trilogy gains new life as Green Earth, a chillingly realistic novel that plunges readers into great floods, a modern Ice Age, and the political fight for all our lives.   The Arctic ice pack averaged thirty feet thick in midwinter when it was first measured in the 1950s. By the end of the century it was down to fifteen. One August the ice broke. The next year the breakup started in July. The third year it began in May. That was last year.   It’s a muggy summer in Washington, D.C., as Senate environmental staffer Charlie Quibler and his scientist wife, Anna, work to call attention to the growing crisis of global warming. But as they fight to align the extraordinary march of modern technology with the awesome forces of nature, fate puts an unusual twist on their efforts—one that will pit science against politics in the heart of the coming storm.   Praise for the Science in the Capital trilogy   “Perhaps it’s no coincidence that one of our most visionary hard sci-fi writers is also a profoundly good nature writer—all the better to tell us what it is we have to lose.”—Los Angeles Times   “An unforgettable demonstration of what can go wrong when an ecological balance is upset.”—The New York Times Book Review   “Absorbing and convincing.”—Nature