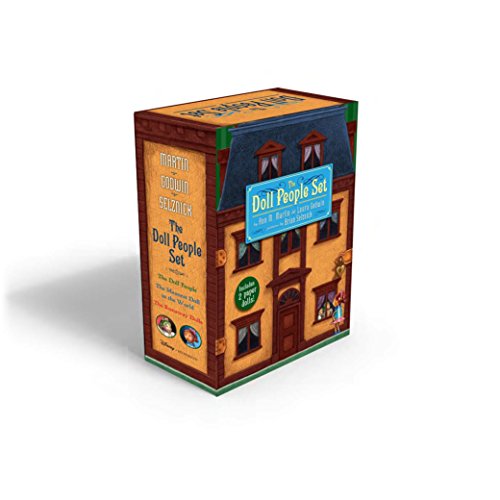 Meet Annabelle Doll, Tiffany Funcraft, and their families in the first three books in The Doll People series by Ann M. Martin and Laura Godwin, with illustrations by Caldecott Medal winner Brian Selznick. Two paper dolls based on the characters are also included in this boxed set.

THE DOLL PEOPLE
Annabelle Doll is eight years old-she has been for more than a hundred years. Not a lot has happened to her, cooped up in the dollhouse, with the same doll family, day after day, year after year . . . until one day the Funcrafts move in.
THE MEANEST DOLL IN THE WORLD
In this sequel to The Doll People, Annabelle Doll and Tiffany Funcraft hitch a ride in Kate's backpack and find themselves in the biggest adventure of their lives: a day at school! But when an attempt to return home lands them in the wrong house, they're in far deeper trouble than they imagined. Along with a host of new doll friends, they also encounter Mean Mimi, the wickedest doll of all.
THE RUNAWAY DOLLS
Best friends Annabelle Doll and Tiffany Funcraft have an unexpected visitor, a new doll named Tilly May. She's arrived in a mysterious package from London, but her face looks so familiar . . . could she be Annabelle's long lost baby sister? With time running out before the package is sent back to England, Annabelle and Tiffany resort to the only course of action they can think of-running away. But how will Annabelle and Tiffany find their way back home . . . and what will happen to Tilly May?
Need Girls & Women tutors? Start your search below:
Need Girls & Women course notes? Start your search below:
Back to top