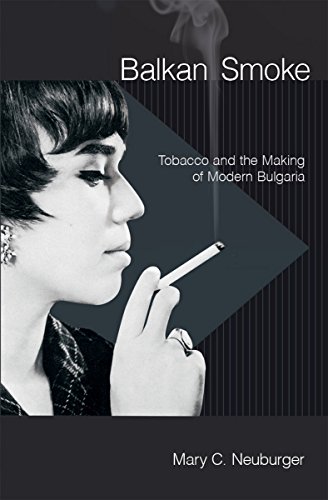 Details about Balkan Smoke: Tobacco and the Making of Modern Bulgaria:

In Balkan Smoke, Mary C. Neuburger leads readers along the Bulgarian-Ottoman caravan routes and into the coffeehouses of Istanbul and Sofia. She reveals how a remote country was drawn into global economic networks through tobacco production and consumption and in the process became modern. In writing the life of tobacco in Bulgaria from the late Ottoman period through the years of Communist rule, Neuburger gives us much more than the cultural history of a commodity; she provides a fresh perspective on the genesis of modern Bulgaria itself. The tobacco trade comes to shape most of Bulgaria’s international relations; it drew Bulgaria into its fateful alliance with Nazi Germany and in the postwar period Bulgaria was the primary supplier of smokes (the famed Bulgarian Gold) for the USSR and its satellites. By the late 1960s Bulgaria was the number one exporter of tobacco in the world, with roughly one eighth of its population involved in production.

Through the pages of this book we visit the places where tobacco is grown and meet the merchants, the workers, and the peasant growers, most of whom are Muslim by the postwar period. Along the way, we learn how smoking and anti-smoking impulses influenced perceptions of luxury and necessity, questions of novelty, imitation, value, taste, and gender-based respectability. While the scope is often global, Neuburger also explores the politics of tobacco within Bulgaria. Among the book’s surprises are the ways in which conflicts over the tobacco industry (and smoking) help to clarify the forbidding quagmire of Bulgarian politics.