God in Eisenhower's Life, Military Career, and Presidency: A History of the Influence of Religion in His Life and Leadership as WWII Supreme Allied Commander and President of the United States 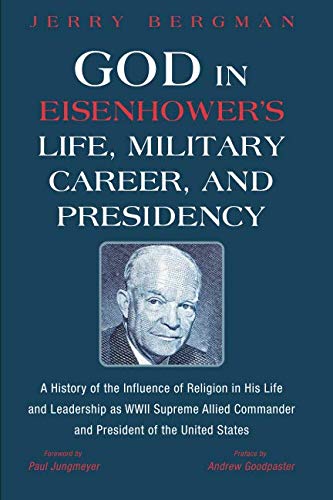 Details about God in Eisenhower's Life, Military Career, and Presidency: A History of the Influence of Religion in His Life and Leadership as WWII Supreme Allied Commander and President of the United States:

As the Supreme Allied Commander in the fight against the Nazis, General Dwight Eisenhower was one of the most important leaders of the last century. His position as a five-star general was crucial in achieving a positive outcome in World War II. Today, he is considered one of the most respected US presidents, but the critical role that his religious beliefs played in his life and work is widely ignored. As one historian wrote, Eisenhower was the most religious president in the twentieth century. He was critical in influencing the nation’s enlarged accommodation to faith, specifically the Christian faith.
The central role Eisenhower’s faith played in his life, from growing up in Abilene, Kansas, to becoming the most powerful leader in the world, is thoroughly documented for the first time in this book. Indeed, Eisenhower’s belief in God made him who he was and allowed him to achieve the work that made him one of the most respected leaders of the free world. This book sets the record straight about common erroneous beliefs concerning President Eisenhower and his family. It is necessary to understand the forces that shaped him so we can put his life and many achievements into perspective.