The Autobiography and Other Writings Signet Classics | Reprint edition 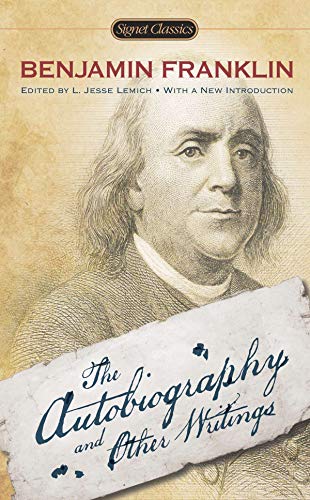 Details about The Autobiography and Other Writings Signet Classics:

A comprehensive and insightful compilation of Benjamin Franklin’s The Autobiography and other essays which offers an in-depth look into the life of America’s most fascinating Founding Father.

Benjamin Franklin was a true Renaissance man: writer, publisher, scientist, inventor, diplomat, and politician. During his long life, he offered advice on attaining wealth, organized public institutions, contributed to the birth of a nation, and negotiated with foreign powers to ensure his country’s survival.

Through the words of the elder statesman himself, The Autobiography and Other Writings presents a remarkable insight into the man and his accomplishments. Additional writings from Benjamin Franklin’s wife and son provide a more intimate portrait of the husband and father who became a legend in his own time.

Edited by L. Jesse Lemich
With an Introduction by Walter Isaacson
and an Afterword by Carla Mulford