Capitalism in America: An Economic History of the United States | Illustrated Edition 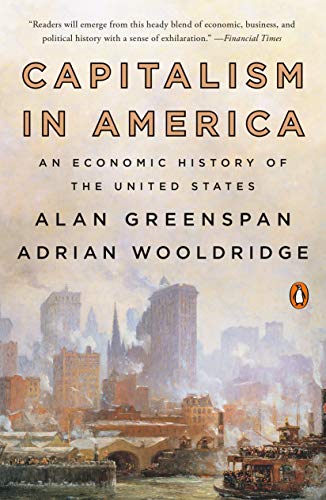 Sell Capitalism in America: An Economic History of the United States for $1.46

Details about Capitalism in America: An Economic History of the United States:

From the legendary former Fed Chairman and the acclaimed Economist writer and historian, the full, epic story of America's evolution from a small patchwork of threadbare colonies to the most powerful engine of wealth and innovation the world has ever seen. Shortlisted for the 2018 Financial Times and McKinsey Business Book of the Year Award From even the start of his fabled career, Alan Greenspan was duly famous for his deep understanding of even the most arcane corners of the American economy, and his restless curiosity to know even more. To the extent possible, he has made a science of understanding how the US economy works almost as a living organism--how it grows and changes, surges and stalls. He has made a particular study of the question of productivity growth, at the heart of which is the riddle of innovation. Where does innovation come from, and how does it spread through a society? And why do some eras see the fruits of innovation spread more democratically, and others, including our own, see the opposite? In Capitalism in America, Greenspan distills a lifetime of grappling with these questions into a thrilling and profound master reckoning with the decisive drivers of the US economy over the course of its history. In partnership with the celebrated Economist journalist and historian Adrian Wooldridge, he unfolds a tale involving vast landscapes, titanic figures, triumphant breakthroughs, enlightenment ideals as well as terrible moral failings. Every crucial debate is here--from the role of slavery in the antebellum Southern economy to the real impact of FDR's New Deal to America's violent mood swings in its openness to global trade and its impact. But to read Capitalism in America is above all to be stirred deeply by the extraordinary productive energies unleashed by millions of ordinary Americans that have driven this country to unprecedented heights of power and prosperity. At heart, the authors argue, America's genius has been its unique tolerance for the effects of creative destruction, the ceaseless churn of the old giving way to the new, driven by new people and new ideas. Often messy and painful, creative destruction has also lifted almost all Americans to standards of living unimaginable to even the wealthiest citizens of the world a few generations past. A sense of justice and human decency demands that those who bear the brunt of the pain of change be protected, but America has always accepted more pain for more gain, and its vaunted rise cannot otherwise be understood, or its challenges faced, without recognizing this legacy. For now, in our time, productivity growth has stalled again, stirring up the populist furies. There's no better moment to apply the lessons of history to the most pressing question we face, that of whether the United States will preserve its preeminence, or see its leadership pass to other, inevitably less democratic powers.