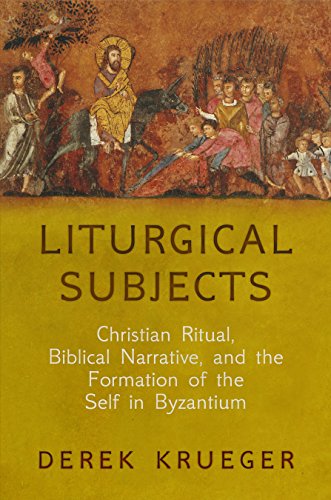 Details about Liturgical Subjects: Christian Ritual, Biblical Narrative, and the Formation of the Self in Byzantium Divinations: Rereading Late Ancient Religion:

Liturgical Subjects examines the history of the self in the Byzantine Empire, challenging narratives of Christian subjectivity that focus only on classical antiquity and the Western Middle Ages. As Derek Krueger demonstrates, Orthodox Christian interior life was profoundly shaped by patterns of worship introduced and disseminated by Byzantine clergy. Hymns, prayers, and sermons transmitted complex emotional responses to biblical stories, particularly during Lent. Religious services and religious art taught congregants who they were in relation to God and each other.

Focusing on Christian practice in Constantinople from the sixth to eleventh centuries, Krueger charts the impact of the liturgical calendar, the eucharistic rite, hymns for vigils and festivals, and scenes from the life of Christ on the making of Christian selves. Exploring the verse of great Byzantine liturgical poets, including Romanos the Melodist, Andrew of Crete, Theodore the Stoudite, and Symeon the New Theologian, he demonstrates how their compositions offered templates for Christian self-regard and self-criticism, defining the Christian "I." Cantors, choirs, and congregations sang in the first person singular expressing guilt and repentence, while prayers and sermons defined the collective identity of the Christian community as sinners in need of salvation. By examining the way models of selfhood were formed, performed, and transmitted in the Byzantine Empire, Liturgical Subjects adds a vital dimension to the history of the self in Western culture.