The World War I Reader 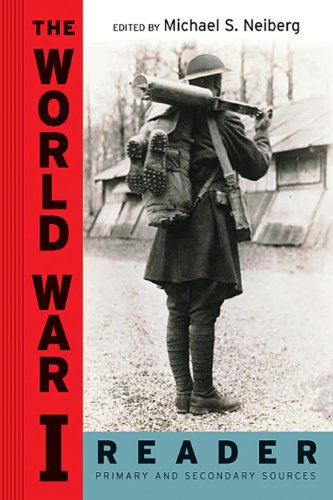 Details about The World War I Reader:

An accessible compilation of primary and secondary scholarship on the frequently misunderstood First World War Almost 100 years after the Treaty of Versailles was signed, World War I continues to be badly understood and greatly oversimplified. Its enormous impact on the world in terms of international diplomacy and politics, and the ways in which future military engagements would evolve, be fought, and ultimately get resolved have been ignored. With this reader of primary and secondary documents, edited and compiled by Michael S. Neiberg, students, scholars, and war buffs can gain an extensive yet accessible understanding of this conflict. Neiberg introduces the basic problems in the history of World War I, shares the words and experiences of the participants themselves, and, finally, presents some of the most innovative and dynamic current scholarship on the war. Neiberg, a leading historian of World War I, has selected a wide array of primary documents, ranging from government papers to personal diaries, demonstrating the war’s devastating effect on all who experienced it, whether President Woodrow Wilson, an English doughboy in the trenches, or a housewife in Germany. In addition to this material, each chapter in The World War I Reader contains a selection of articles and book chapters written by major scholars of World War I, giving readers perspectives on the war that are both historical and contemporary. Chapters are arranged chronologically and by theme, and address causes, the experiences of soldiers and their leaders, battlefield strategies and conditions, home front issues, diplomacy, and peacemaking. A time-line, maps, suggestions for further reading, and a substantive introduction by Neiberg that lays out the historiography of World War I round out the book.