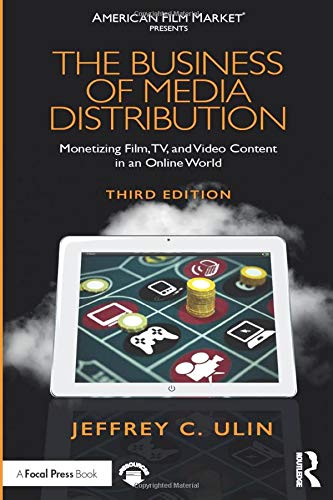 In this updated edition of the industry staple, veteran media executive Jeff Ulin relates business theory and practice across key global market segments—film, television, and online/digital—providing you with an insider’s perspective that can't be found anywhere else. Learn how an idea moves from concept to profit and how distribution dominates the bottom line: Hollywood stars may make the headlines, but marketing and distribution are the behind-the-scenes drivers converting content into cash. The third edition: Includes perspectives from key industry executives at studios, networks, agencies and online leaders, including Fox, Paramount, Lucasfilm, Endeavor, Tencent, MPAA, YouTube, Amazon, and many more; Explores the explosive growth of the Chinese market, including box office trends, participation in financing Hollywood feature films, and the surge in online usage; Illustrates how online streaming leaders like Netflix, Amazon, Apple, YouTube, Hulu and Facebook are changing the way TV content is distributed and consumed, and in cases how these services are moving into theatrical markets; Analyzes online influences and disruption throughout the distribution chain, and explains the risks and impact stemming from changing access points (e.g., stand-alone apps), delivery methods (over-the-top) and consumption patterns (e.g., binge watching); Breaks down historical film windows, the economic drivers behind them, and how online and digital delivery applications are changing the landscape. Ulin provides the virtual apprenticeship you need to demystify and manage the complicated media markets, understand how digital distribution has impacted the ecosystem, and glimpse into the future of how film and television content will be financed, distributed and watched. An online eResource contains further discussion on topics presented in the book.