Education and Social Change: Contours in the History of American Schooling | 5th edition 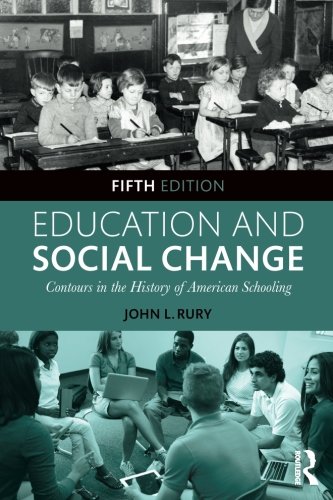 Sell Education and Social Change: Contours in the History of American Schooling for $12.73

Details about Education and Social Change: Contours in the History of American Schooling:

This brief, interpretive history of American schooling focuses on the evolving relationship between education and social change. Like its predecessors, this new edition adopts a thematic approach, investigating the impact of social forces such as industrialization, urbanization, immigration, globalization, and cultural conflict on the development of schools and other educational institutions. It also examines the various ways that schools have contributed to social change, particularly in enhancing the status and accomplishments of certain social groups and not others. Detailed accounts of the experiences of women and minority groups in American history consider how their lives have been affected by education, while "Focal Point" sections within each chapter allow the reader to hone in on key moments in history and their relevance within the broader scope of American schooling from the colonial era to the present.

This new edition has been comprehensively updated and edited for greater readability and clarity. It offers a revised final chapter, updated to include recent change in education politics and policy, in particular the decline of No Child Left Behind and the impact of the Common Core and movements against it. Further additions include enhanced coverage of colonial and early post-colonial American schooling, added materials on persistent issues such as race in education, an updated discussion of the GED program, and a closer look at the role of technology in schools. With its nuanced treatment of both historical and contemporary factors influencing the modern school system, this book remains an excellent resource for investigating and critiquing the social, economic, and cultural development of American education.