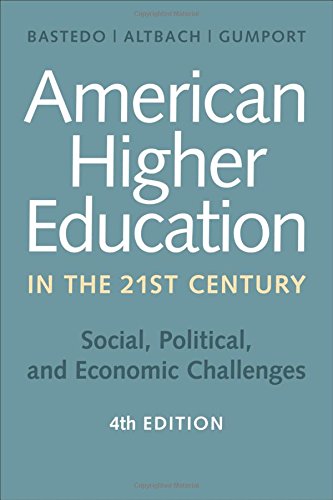 First published in 1999, American Higher Education in the Twenty-First Century offered a comprehensive introduction to the central issues facing American colleges and universities. This thoroughly revised edition brings the classic volume up to date. The contributors have rewritten every chapter to address major changes in higher education, including the rise of organized social movements, the problem of income inequality and stratification, and the growth of for-profit and distance education. Three new chapters cover information technology, community colleges, and teaching and learning.

This edition seeks to capture several crucial dynamics in the nexus of higher education and society. Placing higher education within its social and political contexts, the contributors discuss finance, federal and state governance, faculty, students, curriculum, and academic leadership. They also grapple with growing concerns about the future of the academy and reflect more deeply on the racial, ethnic, and socioeconomic diversity within higher education.

No other book covers such wide-ranging issues under the broader theme of higher education’s relationship to society. Highly acclaimed and incorporating cutting-edge research, American Higher Education in the Twenty-First Century is now more useful and engaging than ever.