and more...
Textbooks / Buy Textbooks / Military / How Everything Became War and the Military Became Everything: Tales from the Pentagon | Reprint edition

How Everything Became War and the Military Became Everything: Tales from the Pentagon | Reprint edition 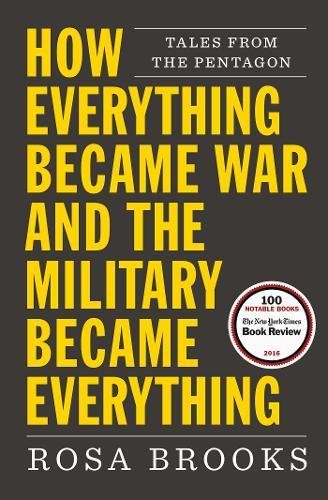 Details about How Everything Became War and the Military Became Everything: Tales from the Pentagon:

Once, war was a temporary state of affairs. Today, America’s wars are everywhere and forever: our enemies change constantly and rarely wear uniforms, and virtually anything can become a weapon. As war expands, so does the role of the US military. Military personnel now analyze computer code, train Afghan judges, build Ebola isolation wards, eavesdrop on electronic communications, develop soap operas, and patrol for pirates. You name it, the military does it.

In this “ambitious and astute” (The Washington Post) work, Rosa Brooks “provides a masterful analysis” (San Francisco Chronicle) of this seismic shift in how America wages war from an unconventional perspective—that of a former top Pentagon official who is the daughter of two anti-war protesters and married to an Army Green Beret. By turns a memoir, a work of journalism, a scholarly exploration of history, anthropology, and law, How Everything Became War and the Military Became Everything is an “illuminating” (The New York Times), “eloquent” (The Boston Globe), “courageous” (US News & World Report), and “essential” (The Dallas Morning News) examination of the role of the military today. Above all, it is a rallying cry, for Brooks issues an urgent warning: When the boundaries around war disappear, we undermine both America’s founding values and the international rules and organizations that keep our world from sliding towards chaos.