Possessing Polynesians: The Science of Settler Colonial Whiteness in Hawai`i and Oceania 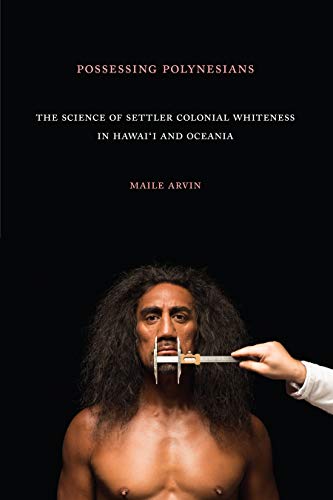 Details about Possessing Polynesians: The Science of Settler Colonial Whiteness in Hawai`i and Oceania:

From their earliest encounters with Indigenous Pacific Islanders, white Europeans and Americans asserted an identification with the racial origins of Polynesians, declaring them to be racially almost white and speculating that they were of Mediterranean or Aryan descent. In Possessing Polynesians Maile Arvin analyzes this racializing history within the context of settler colonialism across Polynesia, especially in Hawai‘i. Arvin argues that a logic of possession through whiteness animates settler colonialism, by which both Polynesia (the place) and Polynesians (the people) become exotic, feminized belongings of whiteness. Seeing whiteness as indigenous to Polynesia provided white settlers with the justification needed to claim Polynesian lands and resources. Understood as possessions, Polynesians were and continue to be denied the privileges of whiteness. Yet Polynesians have long contested these classifications, claims, and cultural representations, and Arvin shows how their resistance to and refusal of white settler logic have regenerated Indigenous forms of recognition.