Lady Editor: Sarah Josepha Hale and the Making of the Modern American Woman 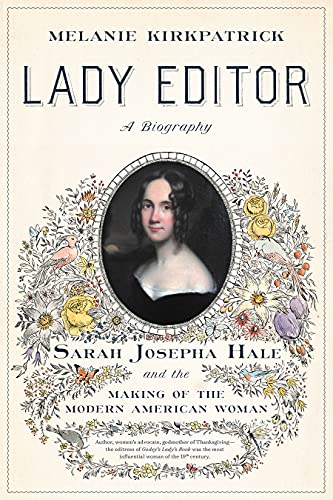 Sell Lady Editor: Sarah Josepha Hale and the Making of the Modern American Woman for $0.30

Details about Lady Editor: Sarah Josepha Hale and the Making of the Modern American Woman:

For half a century Sarah Josepha Hale was the most influential woman in America. As editor of Godey’s Lady’s Book, Hale was the leading cultural arbiter for the growing nation. Women (and many men) turned to her for advice on what to read, what to cook, how to behave, and—most important—what to think. Twenty years before the declaration of women’s rights in Seneca Falls, NY, Sarah Josepha Hale used her powerful pen to promote women’s right to an education, to work, and to manage their own money. There is hardly an aspect of nineteenth-century culture in which Hale did not figure prominently as a pathbreaker. She was one of the first editors to promote American authors writing on American themes. Her stamp of approval advanced the reputations of Edgar Allan Poe, Harriet Beecher Stowe, and Nathaniel Hawthorne. She wrote the first antislavery novel, compiled the first women’s history book, and penned the most recognizable verse in the English language, “Mary Had a Little Lamb.” Americans’ favorite holiday—Thanksgiving—wouldn’t exist without Hale. Re-imagining the New England festival as a patriotic national holiday, she conducted a decades-long campaign to make it happen. Abraham Lincoln took up her suggestion in 1863 and proclaimed the first national Thanksgiving. Most of the women’s equity issues that Hale championed have been achieved, or nearly so. But women’s roles in the “domestic sphere” are arguably less valued today than in Hale’s era. Her beliefs about women’s obligations to family, moral leadership, and principal role in raising children continue to have relevance at a time when many American women think feminism has failed them. We could benefit from re-examining her arguments to honor women’s special roles and responsibilities. Lady Editor re-creates the life of a major nineteenth-century woman, whose career as a writer, editor, and early feminist encompassed ideas central to American history.