and more...
Compare Textbook Prices / Buy Textbooks / Curricula / The Death of Learning: How American Education Has Failed Our Students and What to Do about It

The Death of Learning: How American Education Has Failed Our Students and What to Do about It 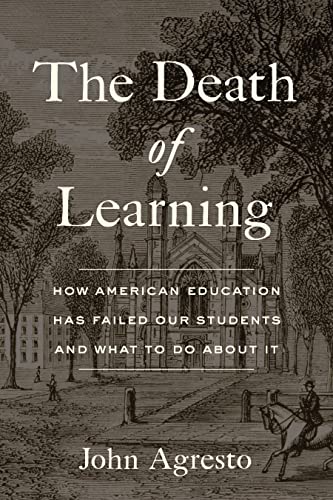 Sell The Death of Learning: How American Education Has Failed Our Students and What to Do about It for $7.27

Details about The Death of Learning: How American Education Has Failed Our Students and What to Do about It:

The liberal arts are dying. They are dying because most Americans don’t see the point of them. Americans don’t understand why anyone would study literature or history or the classics—or, more contemporarily, feminist criticism, whiteness studies, or the literature of postcolonial states—when they can get an engineering or business degree.  Even more concerning is when they read how “Western civilization” has become a term of reproach at so many supposedly thoughtful institutions; or how fanatical political correctness works hard to silence alternative viewpoints; or, more generally, how liberal studies have become scattered, narrow, and small. In this atmosphere, it’s hard to convince parents or their progeny that a liberal education is all that wonderful or that it’s even worthy of respect.  Over sixty years ago, we were introduced to the idea of “the two cultures” in higher education— that is, the growing rift in the academy between the humanities and the sciences, a rift wherein neither side understood the other, spoke to the other, or cared for the other. But this divide in the academy, real as it may be, is nothing compared to another great divide—the rift today between our common American culture and the culture of the academy itself.  So, how can we rebuild the notion that a liberal education is truly of value, both to our students and to the nation? Our highest hopes may be not to “restore” the liberal arts to what they looked like fifty or a hundred years ago but to ask ourselves what a true contemporary American liberal education at its best might look like.  Remedying this situation will involve knowing clearly where we wish to go and then understanding how we might get there. For those objectives, this book is meant to be the beginning.