Political Journalism in London, 1695-1720: Defoe, Swift, Steele and their Contemporaries Studies in the Eighteenth Century 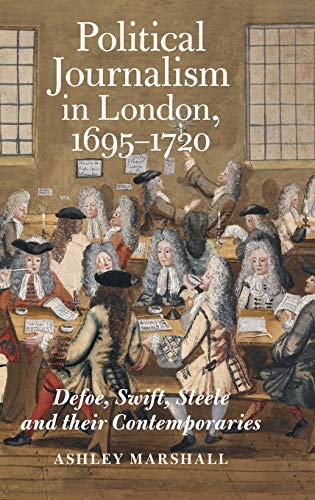 Details about Political Journalism in London, 1695-1720: Defoe, Swift, Steele and their Contemporaries Studies in the Eighteenth Century:

The reign of Queen Anne (1702-1714) saw a remarkable boom in political journalism and newspaper culture in London, in which some of the leading literary lights of the age, Swift, Defoe, Addison, Steele, were heavily involved. While scholars have dealt at length with the physical development and circulation of these newspapers and with their literary contribution, much less has been done to trace the evolving ideologies of London's political newspapers inthis period.
In this major contribution to the study of eighteenth-century political culture, Ashley Marshall shows how the ideologies of the leading papers evolved in direct and indirect response to one another. She offersprovocative re-readings of well-known journals, including Defoe's Review, Swift's Examiner and the various publishing ventures of Richard Steele, and first accounts of the wealth of smaller, short-lived journals which made up the ecosystem of periodical publishing at the time. A ground-breaking final chapter looks at the radically different ways in which periodical writers imagined and addressed their public. Drawing out the distinction between the Whig ideal of a highly engaged citizenry and a Tory press which conditioned its readers to be dutiful subjects rather than active citizens, Marshall argues that these rhetorical differences reflected an ongoing debate about the ultimate role of journalism.

Ashley Marshall is Professor and Chair of English at the University of Nevada, Reno.