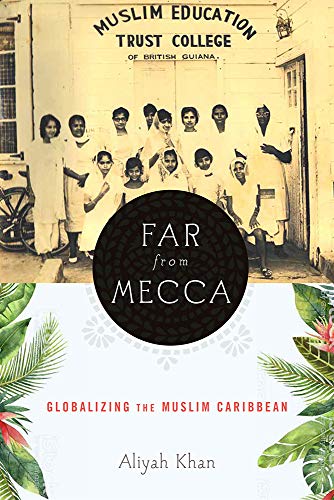 Far from Mecca: Globalizing the Muslim Caribbean is the first academic work on Muslims in the English-speaking Caribbean. Khan focuses on the fiction, poetry, and music of Islam in Guyana, Trinidad, and Jamaica. Combining archival research, ethnography, and literary analysis, Khan argues for a historical continuity of Afro- and Indo-Muslim presence and cultural production in the Caribbean. Case studies explored range from Arabic-language autobiographical and religious texts written by enslaved Sufi West Africans in nineteenth-century Jamaica, to early twentieth-century fictions of post-indenture South Asian Muslim indigeneity and El Dorado, to the attempted government coup in 1990 by the Jamaat al-Muslimeen in Trinidad, as well as the island’s calypso music, to contemporary judicial cases concerning Caribbean Muslims and global terrorism. Khan argues that the Caribbean Muslim subject, the “fullaman,” a performative identity that relies on gendering and racializing Islam, troubles discourses of creolization that are fundamental to postcolonial nationalisms in the Caribbean.