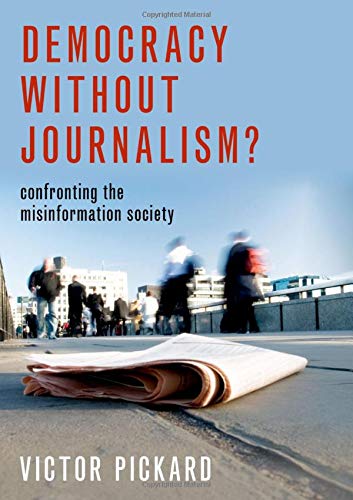 Buy New Democracy without Journalism?: Confronting the Misinformation Society for $20.82

Details about Democracy without Journalism?: Confronting the Misinformation Society:

As local media institutions collapse and news deserts sprout up across the country, the US is facing a profound journalism crisis. Meanwhile, continuous revelations about the role that major media outlets--from Facebook to Fox News--play in the spread of misinformation have exposed deep pathologies in American communication systems. Despite these threats to democracy, policy responses have been woefully inadequate.

In Democracy Without Journalism? Victor Pickard argues that we're overlooking the core roots of the crisis. By uncovering degradations caused by run-amok commercialism, he brings into focus the historical antecedents, market failures, and policy inaction that led to the implosion of commercial journalism and the proliferation of misinformation through both social media and mainstream news. The problem isn't just the loss of journalism or irresponsibility of Facebook, but the very structure upon which our profit-driven media system is built. The rise of a "misinformation society" is symptomatic of historical and endemic weaknesses in the American media system tracing back to the early commercialization of the press in the 1800s. While professionalization was meant to resolve tensions between journalism's public service and profit imperatives, Pickard argues that it merely camouflaged deeper structural maladies. Journalism has always been in crisis. The market never supported the levels of journalism--especially local, international, policy, and investigative reporting--that a healthy democracy requires. Today these long-term defects have metastasized.

In this book, Pickard presents a counter-narrative that shows how the modern journalism crisis stems from media's historical over-reliance on advertising revenue, the ascendance of media monopolies, and a lack of public oversight. He draws attention to the perils of monopoly control over digital infrastructures and the rise of platform monopolies, especially the "Facebook problem." He looks to experiments from the Progressive and New Deal Eras--as well as public media models around the world--to imagine a more reliable and democratic information system. The book envisions what a new kind of journalism might look like, emphasizing the need for a publicly owned and democratically governed media system. Amid growing scrutiny of unaccountable monopoly control over media institutions and concerns about the consequences to democracy, now is an opportune moment to address fundamental flaws in US news and information systems and push for alternatives. Ultimately, the goal is to reinvent journalism.