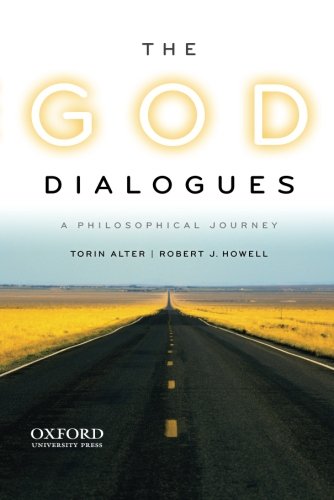 Buy New The God Dialogues: A Philosophical Journey for $15.93

Details about The God Dialogues: A Philosophical Journey:

The God Dialogues is an intriguing and extensive philosophical debate about the existence of God. Engaging and accessible, it covers all the main arguments for and against God's existence, from traditional philosophical "proofs" to arguments that involve the latest developments in biology and physics. Three main characters represent the principal views: Theodore Logan, the theist; Eva Lucien, the atheist; and Gene Sesquois, the agnostic. Their debate takes place during a post-college cross-country road trip during which Gene expresses dismay over his future. He wants to do something meaningful with his life but is at a loss as to how to proceed, despite having just earned a degree in engineering. Gene's quandary precipitates a discussion of the meaning of life and its connection to God's existence. This in turn leads to vigorous debates about morality and theism, evidence for and against God's existence, probability and the rationality of belief, and the relationship between faith and reason. The strongest arguments from all three perspectives are fairly represented. An annotated list of suggested readings directs readers to relevant and helpful primary sources.

Assuming no background knowledge, The God Dialogues is ideal for courses in the philosophy of religion, an excellent supplement for introduction to philosophy courses, and a compelling introduction for anyone with an interest in the subject.