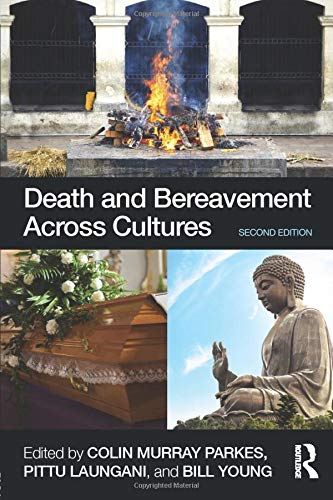 Sell Death and Bereavement Across Cultures: Second edition for $17.60

Details about Death and Bereavement Across Cultures: Second edition:

All societies have their own customs and beliefs surrounding death. In the West, traditional ways of mourning are disappearing, and although Western science has had a major impact on how people die, it has taught us little about the way to die or to grieve. Many whose work brings them into contact with the dying and the bereaved from Western and other cultures are at a loss to know how to offer appropriate and sensitive support.

is a handbook which meets the needs of doctors, nurses, social workers, hospital  chaplains, counsellors and volunteers caring for patients with life-threatening illness and their families before and after bereavement. It is a practical guide explaining the religious and other differences commonly met with in multi-cultural societies when someone is dying or bereaved. In doing so readers may be surprised to find how much we can learn from other cultures about our own attitudes and assumptions about death. Written by international experts in the field the book:

Describes the rituals and beliefs of major world religions;

Explains their psychological and historical context;

Shows how customs are changed by contact with the West;

Considers the implications for the future

The second edition includes new chapters that: explore how members of the health care professions perform roles formerly conducted by priests and shamans can cross the cultural gaps between different cultures and religions; consider the relevance of attitudes and assumptions about death for our understanding of religious and nationalist extremism and its consequences; discuss the Buddhist, Islamic and Christian ways of death.

Death raises questions which science cannot answer. Whatever our personal beliefs we can all gain from learning how others view these ultimate problems. This book explores the richness of mourning traditions around the world with the aim of increasing the sensitivity and understanding which we all bring to the issue of death and bereavement.